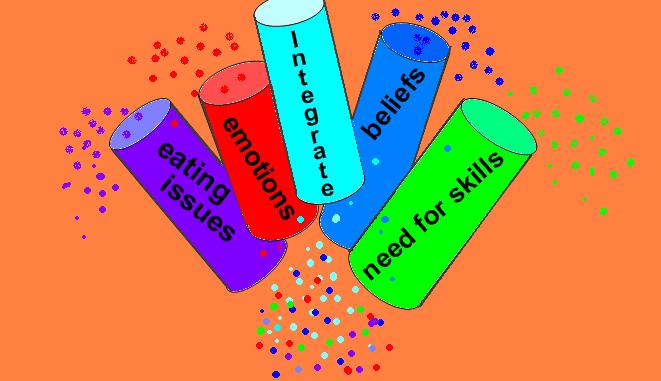 Image by Debbie Digioia
I was listening to a talk on the dangers of “the silo effect” on U.S. climate change policy and thought about how we compartmentalize our eating problems in a similar way—to our own detriment. According to Wikepedia, “The Silo Effect refers to a lack of information flowing between groups or parts of an organization. On a farm, silos prevent different grains from mixing. In an organization, the Silo Effect limits the interactions between members of different branches of the company, thus leading to reduced productivity (https://en.wikipedia.org/wiki/Information_silo).
In a similar way, we have silo ways of thinking about ourselves that inhibit our efficiency. We think of having eating problems, unhealthy beliefs, emotional problems, or skill deficits, but rarely consider how they impact one and other. For what feels like forever, we’ve regarded problems with overeating and mindless eating as being due solely to lack of self-discipline or self-control. We’ve viewed our emotional selves as being a certain way. How often do we say to ourselves or others, “I get upset really easily. That’s just who I am,” as if we can never change. We view our life skills the same way, “I’m just weak willed,” we insist, “You know how I am, I can’t say no to anyone” or “I’ve always been a pushover.” Or we say things like, “I know it’s silly to believe this, but…”
As if each silo—eating, emotions, beliefs and life skills—has nothing to do with the other silos. The truth is that the emotions we feel are based mainly on what we believe. Whether we express or contain emotions appropriately is due, in large part, to the skills we learned in childhood and beyond to regulate our nervous system. The way we approach eating—mindlessly or mindfully—springs from our beliefs about food, our mood and how we handle it, and the behaviors we learned to eat  or not eat “normally.” The truth is that eating is never really just the food silo, but about the different systems in our mind-bodies being well integrated and working effectively together—or not.
Do you compartmentalize eating, emotions, beliefs and life skills or do you see them as part of the larger feedback system that drives and regulates you? Dysregulated eaters often want only to focus on eating less or eating healthy foods, and have difficulty accepting that so many other aspects of themselves markedly affect their ability to reduce portion sides or eat more nutritiously. I can tell you that if you’re still trying to white knuckle eating better, you’re not going to get very far for very long. It’s time to step back and take a more holistic, integrated view of yourself and the changes you need to make to attain and maintain your eating and health goals.
Best,
Karen
http://www.karenrkoenig.com/
https://www.facebook.com/normaleatingwithkarenrkoenig/
http://www.nicegirlsfinishfat.com/
http://www.youtube.com/user/KarenRKoenig
http://twitter.com/KarenRKoenig
APPetite on Facebook
Tweet
Stop Measuring Everything Against Perfect
Persistence Leads to Success