How to Cut Back on Hurting Yourself 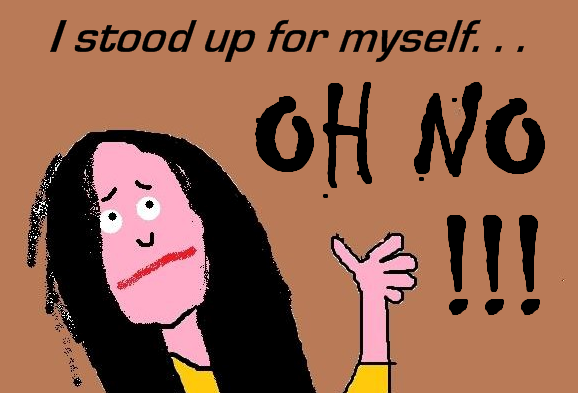 Image by Debbie Digioia
For a while there, I had a spate of clients who were eating up a storm because they were trying too hard not to hurt the feelings of people they loved — parents, friends, adult children, spouses, colleagues, or siblings. Being hell-bent on food-seeking was a way to stuff down anger, frustration, disappointment, and helplessness. As these emotions were their default setting, there was a whole lot of emotional eating going on.
One client’s sister was taking serious advantage of her largesse and had become desperately dependent on her. Another client’s father often threatened to have nothing to do with his grandchildren whenever my client tried to buck or duck his unreasonable demands. Yet another client’s adult child was rude and bullied her though he was living with Mom all expenses paid. One more had a mother who was petulant, explosive, and cared nothing about her daughter’s welfare, though she tearfully insisted she did.
All of these clients were trying to avoid the inevitable, something they perceived as so horrifying and unacceptable, that they could hardly bear to talk about it, never mind do it: hurt the feelings of someone they loved. They were so used to hurting (feeling upset) or hurting themselves (by shutting down feelings with food), that they could see no way out of their dilemma. If they stopped stuffing down their (very justifiable, in my book) upset, they might feel so deeply wounded, angry, or abused that they feared they’d blurt out the truth about what they felt and hurt their loved one’s’ feelings.
Far too many dysregulated eaters use food (or weight obsession) to contain and mask their true — natural, normal, healthy, authentic, rightful, helpful — feelings. A reminder: You are supposed to feel upset when people hurt you regularly without regard or apology. I bet you’re not too sensitive (though others might say so), too selfish (though others might accuse you of it), or a bad person (though others might insist you are). You’re probably someone who’s been consuming a steady diet of abuse for so long that it’s time to cut way, way back or go cold turkey and eliminate it from your life for good.
It’s not only the mindless eating that’s unhealthy, it’s the fact that you will never feel good about yourself and your ability to take care of yourself — ever — until you know for certain that you will never allow people to abuse you no matter what. Esteeming yourself grows from choosing only what enhances your life, food and people, from not allowing yourself to swallow mistreatment by others and, moreover, by sometimes hurting them to protect yourself. Cutting out letting others hurt you is one kind of diet I can get behind.
Best,
Karen
http://www.karenrkoenig.com/
https://www.facebook.com/normaleatingwithkarenrkoenig/
http://www.nicegirlsfinishfat.com/
http://www.youtube.com/user/KarenRKoenig
http://twitter.com/KarenRKoenig
APPetite on Facebook
Tweet
How Habits and Intent Affect Snacking
Stop Measuring Everything Against Perfect