Eating by the Light of the TV—Not 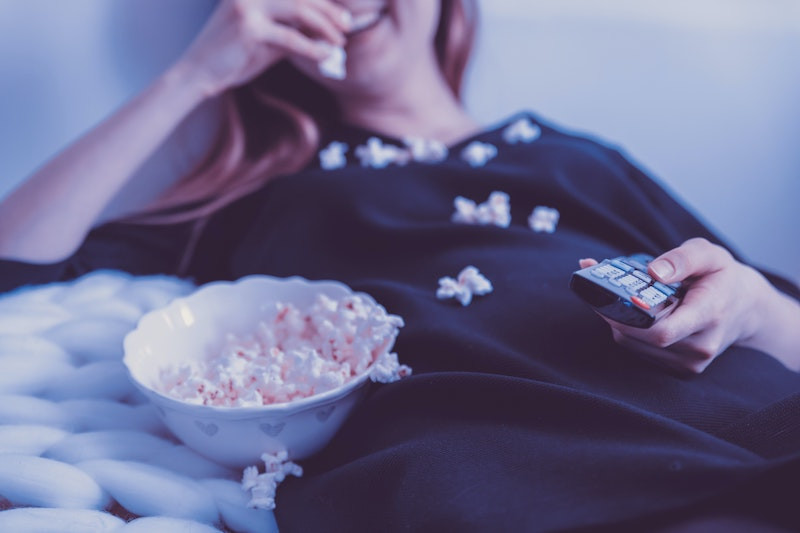 I’m not sure when TV watching plus eating became de rigueur, but perhaps this entwinement is based on movie viewing in theatres while snacking on popcorn. It’s not an unhealthy habit per se—except if you’re trying to be mindful about eating and consume less food. The way to learn new habits is by focusing on them with 100% concentration which is the antithesis of what happens when glued to your set.

Most of us watch TV to become absorbed in what we’re seeing and turn off our minds. Whether we’re into programs about the news, travel, or history, movies or our favorite binge-worthy shows, the idea is to escape consciousness and relax. There’s not a thing wrong with doing that. We need to turn off our busy brains and give them a rest and watching TV is a fine way to do that.

But while our thinking mind is resting as its TV viewing, it’s also resting while eating and there lies the problem: We need our brains to be fully attentive to what we’re putting into our mouths in order to learn to eat according to appetite and this is impossible while we’re engaged in an activity like TV watching meant to take our frontal lobes offline.

Once you’ve established intuitive eating habits, you can watch TV and snack, although I don’t advise eating whole meals, especially dinner, in front of what used to be called the Boob Tube. An occasional snack, sure; a whole meal you want to savor, no way.

We eat while watching TV because: This is what our family did when we were growing up. We believe we don’t have time to eat separately from watching TV. We think doing so doubles the mindless pleasure of the experience. We’re lonely and think of the TV as keeping us company so we don’t feel it. Sheer habit.

We break this habit by changing our beliefs about these activities and our self-talk. Rather than focus on the double enjoyment of TV viewing and eating, remind yourself that you’ll get twice the enjoyment from savoring a meal and losing yourself in your favorite program. If you’re a parent, consider what you’re teaching your children and how you’re establishing an unhealthy, lifelong pattern in them. Give yourself a television reward after you’ve eaten a meal sitting down at a table without it. If you want a snack while watching TV, click pause, get your food and eat it, then come back and pick up your program where you left off.

Do all of the above for three to six weeks and you’ll have made inroads into breaking the TV-food habit. This is not rocket science, people. It’s just practice.